The new beta fish looked up at me from its cup sloshing around in the back of a taxi on my lap. He didn’t expect to be here and neither did I. He’s not the same as the last fish, but he’s just going to have to be good enough.

His predecessor met an untimely demise, another casualty of the aftermath of my husband’s infidelity. He bobbed to the surface like my broken heart, buoyed by breathtaking loss.

Taking care of the fish was never my thing. It was his thing but he left the fish, me and the kid and the fish was the one who most obviously didn’t make it. Admitting defeat wasn’t something I could manage. Any other week we would’ve had a fishy funeral. But not this week.

It would seem we were both standing in for someone who used to exist, pretending to be the same for the sake of a little boy he could not bear the grief of another loss. I struggled to feed the last one, just like I struggled to feed myself in my grief. Absent cues for nourishment, I would forget too often. Too little, too late – a familiar story as of late.

I sympathized with the fish as it slipped into unfamiliar waters, exploring the boundaries of its new container. No time to adjust, sliding into the shock of something new without warning. He didn’t ask for a new tank but here he was. SAME, I thought with just a hint of bitterness.

He kept swimming and so would I, because what choice did we have? When my son came home he remarked the fish must be so strong to still be alive after so many years. I wonder if people think the same of me as I blow bubbles beneath the surface in the artificial light of my newsfeed. If we look the same on the outside, who’s to know the difference and does it even matter?

He didn’t expect to be here and neither did I. We are doing the best we can to adjust to unfamiliar waters and that’s just going to have to be good enough. 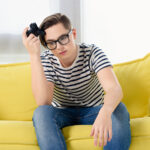 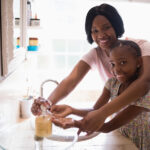 Trust Me, I’m Not an Expert