The most annoying advice I’ve ever received was that I should stop looking for a guy, and then I’d find one. That’s right up there with “If you love them, set them free.” Ridiculous platitudes that tell you to do the opposite of what you want to.

Which is exactly why it’s good advice.

In my late twenties, after getting out of a 3+ year relationship and being on the single scene for longer than I was comfortable with, my good friend Anne Marie bestowed this infuriatingly accurate advice on me.

“You’re trying too hard, and that’s why you’re only attracting wankers,” she declared, true to her blunt Irish nature.

Harsh, but spot on. When I went out on the town, I must have been giving off a sense of desperation that I couldn’t detect, but men miles around could. The good guys weren’t attracted to it and the creeps sensed a chance to take advantage of a vulnerable girl. No wonder I was striking out all over the place.

I fully intended to stop trying but it’s hard to just switch off like that. I still liked to go out and I couldn’t help keeping an eye out for cuties.

About a week later, Anne Marie and I were enjoying a little too much wine at her house and were discussing my latest crush, a guy who looked like Colin Firth and was about as big of an ass as Mark Darcy. I was hopelessly in lust with this sexy, unattainable bad boy.

“I thought I suggested you stop trying. Sorry sweetie, but this jerk clearly isn’t into you. His loss.”

“Ugh, I know. But it’s hard to give up! He really should like me more than he does.”

“Totally. But… he doesn’t. Now I’m going to the loo. When I come back, you better not be texting him, missy.” She even shook her finger at me to emphasize her point.

I tossed my phone into the beanbag chair across the room to emphasize my point. “See? No texts.”

Satisfied, she left the room. As soon as the bathroom door clicked shut, I rolled inelegantly off the couch to fetch my phone. Due to the inhuman amount of wine I’d consumed, I could hardly make out the screen. I had to cover one eye and type out the rest of my text with one hand: “You really should like me more than you do.” Send!

“Are you doing what I think you’re doing?” Anne Marie’s voice rang out as she returned from the restroom.

“Let me see that,” she said as she yanked the phone from my hands.

I cringed as she read the text out loud.

“I thought you needed some tough love. Now I don’t know what you need. You’re gutsy—I’ll give you that. But I hate to see you wasting your time on people who aren’t worth it. More wine?”

I needed the tough love. Probably didn’t need the wine. Definitely realized it the next morning when I woke up with the world’s worst hangover. (Ha, that last part’s not true. I’ve had plenty worse hangovers after that because I. NEVER. LEARN.)

But you know what? Something had finally clicked and I felt different. I felt like I could party without surreptitiously scoping out guys.

On the night of what would have been my four-year anniversary with my ex, I enjoyed a relaxing massage, then went out with the girls. I had no make-up on and my hair looked just fabulous (read: a touch greasy) after the massage oils had done their job. I really and truly was not thinking about meeting anyone.

Then, after a few drinks and several uncoordinated dance moves on the dance floor (my trademark) I locked eyes with a hunk of a dude. I talked to him, asked his advice on what drink I should order next, and was generally relaxed about the whole thing because I was FINALLY not looking for a man.

Now, five years later, we’re married with two kids. I’ll be darned if that wasn’t the best advice I’d ever been given. 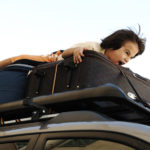 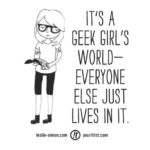 My Daughter Is Her Own Girl