Recently, mornings have become a bit darker. And by darker, I mean like the stuff horror films are made of. I’m talking about rolling over to find a haunting figure just looming there; one who appears at first to be that poltergeist thingy from The Ring but who is actually my middle child (a formerly sweet and cuddly 9-year-old girl).

Sometimes this terrifying figure makes groaning sounds. Sometimes it paces or stomps around shouting out grievances like: it’s still night time, the alarm is SO mean, and mornings are the worst!

Oh, I get it. I do! Mornings, by their very nature, are a punch to the pie hole. And the truth is, for the first fifteen minutes of every day I’m a lot like a sloth; and not just any ‘ol sloth but one who’s high on steroids or some other anger-inducing drug. Which is why I do my main morning-stuff (like uniforms, backpacks, and lunches) the night before. I am dysfunctional and I’m grumpy in the morning so simple beginnings are where it’s at for me.

But, since I share my life with three kids, my simple-beginnings plan doesn’t always work out. And the past few weeks, my formerly sweet and cuddly, 9-year-old has been putting this strung-out-sloth-mom to the test. One day last week things actually got physical between her and her little sister. I had been awake for less than a minute at the time. Basically, my youngest daughter was not aware of the brand new (created right that moment) rule: Standing in the doorway of the bathroom while the older sibling is in it is now a forbidden act! So, by choosing to do so, the poor kid (who can be known to annoy but was not currently trying to) ended up getting a swift kick to the hamstring, as delivered by my 9-year-old (whom, I stress, really does have a heart of gold).

I sat groggily, helplessly, on the toilet, watching this go down. I couldn’t even muster a sound let alone begin to referee. My youngest retaliated and then dropped to the bathroom floor in exaggerated tears. I, feeling both trapped and stunned, peeled my groggy ass cheeks from the loo and exited the bathroom … closing the door firmly, and with intention, behind me. (Let’s just pretend that didn’t happen).

Of course, bigger cries erupted and the poltergeist raged into full force. The door flung open and… I tried. I tried to be silent. I tried to walk away, knowing I was not equipped for this confrontational (before coffee) scene. BUT she persisted and then… I unleashed my inner-beast and gave my daughter the full hairdryer treatment, complete with dragon breath finishing spray.

And as I reached for the coffee, she reached for my phone. My little firecracker then searched my camera roll, found a photo of herself and her two sisters, and proceeded to edit her face out of the picture. I looked over her shoulder just as she selected the now two-kid photo as my new wallpaper.

The message was clear. My sweet, kind daughter had left the building. Oh, and I was now a mother of two instead of three…

Later on, after school, she asked for my phone. I passed it to her and she changed the picture back. I was officially her mom again and she, my sweet girl. We then laughed at how ridiculous we’d both been that morning.

We tried to combat the moods by sending her to bed earlier for a few nights (as in 7:30 instead of 8:30) it helped a little but we were still experiencing fairly rude awakenings. And then, last night, it all became clear.

My daughter called me, quite excited I might add, into her room. “Mom! MOM! Smell my pit, Mom. It stinks?!” I nudged my nose into her smooth, little armpit and, sure enough, it was eau du lamb kabob with extra onions in there.

So this morning I’ll be booking myself a decade-long trip to Hawaii. Wanna come? 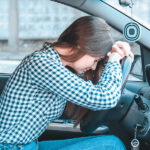 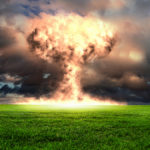